In your issue of March 19, an article mistakenly implied...

In your issue of March 19, an article mistakenly implied that Christian Science is "an offshoot of mesmerism." Those who have proved even slightly the healing power of God, divine Mind, as elucidated by Mary Baker Eddy, the Discoverer and Founder of Christian Science, understand that there is no relation between Christian Science and mesmerism, for the theories of Mesmer are exactly opposite to the teachings of Mrs. Eddy.

Mesmerism, or hypnotism, as it is sometimes called, is based on deception; it is a product of the carnal mind, and is destructive to mental acumen and well-being. Paul said: "For to be carnally minded is death; but to be spiritually minded is life and peace. Because the carnal mind is enmity against God."

Send a comment to the editors
NEXT IN THIS ISSUE
Article
Through your courtesy I wish to correct some of the misrepresentations... 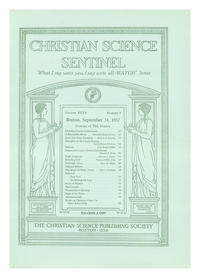