A STUDENT of Christian Science was hastily, yet ineffectually, striving to perform newly assigned tasks, when his supervisor stepped over to where he was working and said: "Don't hurry. Hurry is an I-don't-trust-God method." The student gratefully and obediently accepted the loving rebuke, and prayerfully turned to divine Mind for wisdom. He saw that others were working with calm, not tense, efficiency. Could he not do likewise? Evidently his hurried sense was caused by fear that he could not complete his share of the work within the apparently limited time available.

A more scientific comprehension of the nature of time and a firmer trust in God as the source of all real activity were seen to be requisite. As these were attained, he became more alert. Many unnecessary motions were abandoned, and he was soon able to perform his tasks with some measure of the calm efficiency he had admired in his coworkers. 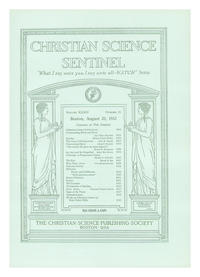