Each day finds me more grateful for Christian Science,...

Each day finds me more grateful for Christian Science, which is teaching us that "God's promises are kept," and that He is "a very present help in trouble." I did not learn of Christian Science through a physical healing, but through seeking help for a dear one. The practitioner's explanation of Truth gave me that for which I had been hungering. My daughter was placed in the Christian Science Sunday School, and I began an earnest study of the textbook, "Science and Health with Key to the Scriptures" by Mary Baker Eddy.

Our first test was a case of scarlet fever manifested by the child. Reared in a physician's family, I had been taught how serious fever was believed to be to a child. Before learning of Christian Science I used to be terror-stricken whenever my daughter manifested the slightest degree of fever, but this time I had no fear. I was learning to go "unto my Father." The sickness continued almost a week, and then one night she seemed to be much worse. We talked over what she had learned in the Sunday school, and I read from the textbook, We realized the impossibility of God's child being sick, since God, the loving Father-Mother, the only creator, cares for His creation in eternal perfection and harmony, and His great love encircles, upholds, and guides us. I went to bed and to sleep. The morning brought deliverance: not a sign of the error remained. Like the man healed "at the gate of the temple which is called Beautiful," who went walking and leaping and praising God, so the child danced and sang in gratitude for her freedom. I knew that when my fear was wholly allayed the child was healed. Mrs. Eddy says (Science and Health, p. 376), "Destroy fear, and you end fever."

Send a comment to the editors
NEXT IN THIS ISSUE
Testimony of Healing
Christian Science first came to my notice through the... 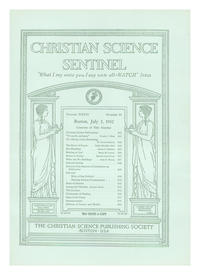