My attention has been drawn to the report of an address...

My attention has been drawn to the report of an address in your issue of the 8th inst., in which an archdeacon is quoted as saying that Christian Science has put up a false signpost and said, "Don't go to the doctor," and that the way of the Christian Science practitioner was the way to death. Will you permit me to say that both of these statements are entirely erroneous and misleading; and I shall be grateful for space to reply.

The following quotations from the Christian Science textbook, "Science and Health with Key to the Scriptures" by Mary Baker Eddy, will clear up the points. On page 423 she states: "The Christian Scientist, understanding scientifically that all is Mind, commences with mental causation, the truth of being, to destroy the error. This corrective is an alterative, reaching to every part of the human system. According to Scripture, it searches 'the joints and marrow,' and it restores the harmony of man. The matter-physician deals with matter as both his foe and his remedy. He regards the ailment as weakened or strengthened according to the evidence which matter presents." And on pages 238 and 239: "The cross is the central emblem of history. It is the lodestar in the demonstration of Christian healing,—the demonstration by which sin and sickness are destroyed."

Send a comment to the editors
NEXT IN THIS ISSUE
Article
The item that appeared a few days ago in your column... 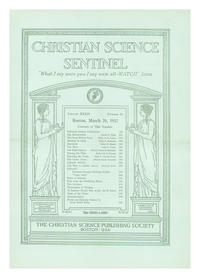