A reader of a professor's articles which appear in the...

Peter B. Biggins, Committee on Publication for the Province of Alberta, Canada,—Edmonton

A reader of a professor's articles which appear in the Bulletin has asked him to recommend to some of his correspondents that they try Christian Science for their mental ills, as this reader has been benefited by Christian Science. He says in his own expressive language: "I know of no mental treatment that is one tenth as beneficial. . . . It surely has all other methods of mental treatment 'backed off the boards.' " The professor in his reply to this reader's request, says that he does not propose "to discuss Christian Science either as a religion or as a form of practice." Nevertheless, he makes a number of statements which require comment and correction.

The professor writes: "No group in the community can expose other groups to the contagion of disease under the plea that their religious belief denies the reality of such disease, and decline to call in the medical practitioner. . . ." Christian Scientists cannot properly be accused of exposing others to contagion. The fact is that the teaching of Christian Science requires the reporting of infectious or contagious diseases, and many fair-minded health officers frankly admit that Christian Scientists are more than ordinarily conscientious in this respect.

Send a comment to the editors
NEXT IN THIS ISSUE
Article
In an issue of your paper a writer on the International... 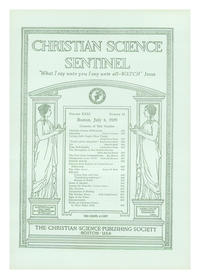