A writer who has previously admitted in your paper his...

A writer who has previously admitted in your paper his hostility to Christian Science, while commending, in your recent issue, the introduction of "Doctor's Day" in the church, which innovation he regards as "a real inspiration," has taken occasion to make some incorrect and misleading statements about Christian Science. The critic claims that Christian Science is "the greatest foe to medical science and disease prevention," and believes it would be fitting that the houses of worship of other Protestants, Catholics, and Jews be used to combat the teaching of this religion. Because Christian Science, through spiritual means, is healing sickness and destroying sin—a fact testified to by thousands—it does not follow, and it is not the case, that it opposes any system of healing or retards the prevention of disease. Christian Scientists never attack any medical system or its advocates; neither do they attack any religion or its followers. They are striving, with considerable success, to heal sickness and to destroy sin in accordance with the commands of the Master. Indeed, many eminent physicians, as well as clergymen, have paid generous tribute to the healing efficacy of Christian Science and the good it is accomplishing. Also, it must be clear to everyone that a religion which has made thousands of persons ardent Bible students, restored invalids to useful lives, and destroyed false appetites, does not "befuddle the minds of ... people," as averred by the critic.

The critic refers to medicine as a science, but implies that science has no relation to religion. In this connection, Rev. James L. Gordon, D.D., a noted Congregational minister of international repute, has written: "The oldest thing in the world is religion. The newest thing in the world is science. The two greatest names in the world, to-day, are Christianity and Science." Therefore, it is interesting to notice that one of the oldest and most steadfast of religions, and one of those which the critic has called upon to combat Christian Science, has employed the term "Jewish Science" to designate that branch of its work devoted to spiritual healing. The critic avers that medicine is a science, but that Christ Jesus was not a Scientist. It is unthinkable that there was no Principle or Science behind the mighty works of him who healed the leper, restored sight to the blind, stilled the tempest, walked on the water, fed the multitude, raised the dead, and as a final crowning achievement walked forth from the tomb where he had lain for three days after his crucifixion. Surely, if these mighty works were not performed in accordance with a fixed law which could be scientifically utilized by mankind, then the Master's command that they be performed by his followers was vain.

Send a comment to the editors
NEXT IN THIS ISSUE
Article
In the report of the Taunton Town Mission, in drawing... 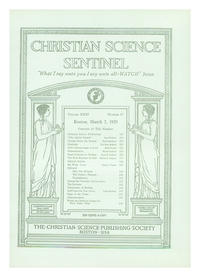