The Individual and World Affairs

There is a blessing for which loyal Christian Scientists are continually giving thanks to God. It is the priceless knowledge that has come into their lives concerning the manner in which they may apply the understanding of God's perfect and unchanging law which Christian Science has given them. Past history furnishes many instances of untiring effort put forth under trying circumstances by thinkers, religious reformers, and well-meaning people generally, who were dissatisfied with existing discordant conditions, and who wished to discover a pathway capable of leading mankind out of the labyrinth of false material beliefs. Most of these sincere workers, however, merely succeeded in drawing attention to human faults, without being able either to trace the specific cause for such errors or to indicate a practical method for their destruction.

Now it must be admitted that to criticize and condemn the various unpleasant events which occur on our planet is by no means a difficult task. This has often been done in the past, and, alas, is still the occupation of many. It remained for Mary Baker Eddy to proclaim anew to suffering humanity, in clear and unequivocal language, those divine and definite rules acknowledged and obeyed in their entirety by Christ Jesus, the Way-shower, by the application of which the nothingness of all forms of error is revealed and its seeming power completely destroyed. 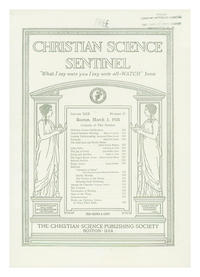