"And as ye go, preach, saying, The kingdom of heaven is at hand. Heal the sick, cleanse the lepers, raise the dead, cast out devils." These words, as Matthew records in the tenth chapter of his Gospel, Jesus addressed to the twelve disciples whom he sent forth "to the lost sheep of the house of Israel." What a comprehensive mission was the Master's! What a mission became that of his immediate disciples and, thereafter, of his followers for all time! Jesus did not ask his disciples to do anything which he himself had not done. He had healed "all manner of disease among the people," including leprosy and lunacy; he had destroyed the desire to sin; he had raised the dead. The disciples had witnessed the healings; and when the twelve were sent forth, as the narrative says, they were given power to do precisely those things which to human sense were miraculous.

Wherein lay the power which enabled Christ Jesus and, later, his disciples to heal disease and sin? Mrs. Eddy answers the question on page 141 of "Science and Health with Key to the Scriptures" in these words: "In healing the sick and sinning, Jesus elaborated the fact that the healing effect followed the understanding of the divine Principle and of the Christ-spirit which governed the corporeal Jesus." The Master understood, with a marvelously clear understanding, the nature of God as the cause of all reality, and, consequently, he knew with equal clarity the nature of reality itself, including the real man. This spiritual understanding, together with the Christ-spirit which animated his whole life, enabled him so perfectly to see the unreality of all unlike God, good, that the false belief in evil—whatever the form it seemed to take in its approach to him—was destroyed, usually instantaneously. 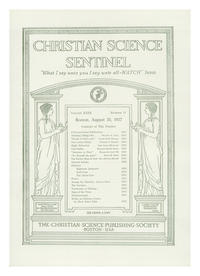