One of the first steps the beginner in Christian Science takes is to gain a new and better idea of God, thus replacing the old concept of God as the sender of sickness, sorrow, punishment, poverty, and death. When commissioning Moses to perform the great work of leading the children of Israel out of the bondage of Egypt, God revealed Himself as the "I AM." The potency of this revelation destroyed Moses' fear of the shackles of Egyptian slavery, and led the children of Israel safely through the Red Sea, supplied them with manna in the wilderness, enabled them to obtain water from the rock, conquered all their enemies, and brought them ultimately into the promised land.

A yet larger vision of God comes to the student of Christian Science, who, as he glimpses the wonder which this Science reveals of God as divine Mind, begins to cognize something of his own spirituality. The material senses begin to lose their seeming power as he realizes that man is the reflection of the great "I AM," and sees that his real self can know and understand something of the infinite glory of the one divine Mind. As in the case of the Israelites, this vision brings deliverance from the fetters of materiality, disease is healed, and the student experiences the spiritual enlightenment which raises him above the material senses and brings him unscathed through many dangers and temptations. 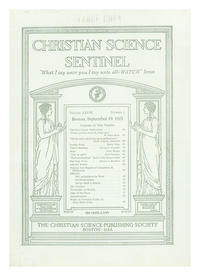