I first became interested in Christian Science in 1910, my brother having been healed of severe eye trouble at that time. As he was not able to use his eyes to read, I read to him from "Science and Health with Key to the Scriptures" by Mary Baker Eddy, and with the faithful help of a Christian Science practitioner he was healed of this trouble. During the years since then I have witnessed many healings.

In April, 1917, my wife was taken ill with throat trouble, which in a few days had become serious, the throat being almost closed and badly swollen, attended by high temperature. I had asked her to have help from a practitioner; but, thinking that the condition would improve, she had not consented to do so. But one evening about a week after the trouble first appeared, when she had become delirious and could not lie down without choking, I hurriedly went to a practitioner's home to ask for help. The practitioner said that she would begin treatment at once, and that I must not be disturbed, for everything would be all right. I was away from home not more than half an hour. Upon my return I found my wife resting peacefully, and the fever gone. She was completely healed, and was up doing her work the second day after the practitioner was asked for help.

Send a comment to the editors
NEXT IN THIS ISSUE
Testimony of Healing
Faced suddenly with unusual financial problems, and... 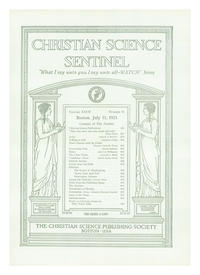