The Portals of the Church

The student of Christian Science is unceasingly grateful for the enlarged vision of church which Mary Baker Eddy has given to the world. An organization whose members are in agreement as to the means of salvation, and which holds services for the purpose of divine worship, has for centuries been regarded as a church. The best known dictionaries and encyclopedias bear out the commonly accepted statement that a church is a formally organized body of Christians worshiping together.

That Mrs. Eddy had a very deep respect and love for the church in general and that she was profoundly grateful for the good it had accomplished for mankind are evidenced through her writings and by her many acts of kindness and generosity. But her great discovery of the allness of God and the consequent nothingness of matter, or evil, was destined to give a new meaning of church—a meaning which turns to its portals those who "labour and are heavy laden," brings ease from pain, and uplifts consciousness to a realization of the fact that God is ever available for the destruction of every form of error. 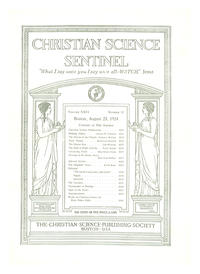