An editorial in a recent issue of a widely read weekly periodical advises its readers to submit, at least once a year, to thorough physical examination by a physician in order to determine the status of their health. Interestingly enough, the advice is intended mainly for those who have every reason for concluding that they are well, the presumption being that one may be seriously ill when he least suspects it. The advice, of course, is based on the time-honored but erroneous supposition that matter is the leading factor in determining human weal or woe.

Throughout the ages, mankind has been pursuing the search for health and happiness in matter; but the deeper it has sunk into the depths of materiality the more have disease-beliefs claimed to multiply. In view of this, one may be pardoned for wondering at the willingness of worldly wisdom to continue a quest that daily and hourly becomes more baffling; for, admitting that that which induces disease cannot cure it, the conclusion is unavoidable that health is not in matter and will never be found there. 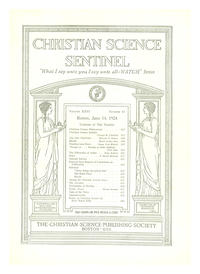