In human experience, it is more often the pains of material sense rather than the search for Truth which turn us to the reality of things. In that dark night before a knowledge of Christian Science came to individual consciousness, how often has the shocked sense looked out upon what seemed to be gross injustice, unnumerable instances of "man's inhumanity to man," and dead formalism,—a night almost without a gleam of spiritual understanding to light up its Stygian darkness! As soon as Christian Science is found, however, there is "balm in Gilead," and the ever ready Physician, divine Love, heals the sick in mind and body. Christian Science at once gives discouraged humanity a basis to work from; for it is learned therein, as Mrs. Eddy says in the Christian Science textbook, "Science and Health with Key to the Scriptures" (p. 192), that "evil is not power." God is the only power,—omnipotent, infinitely good, and without an unlikeness. This vital knowledge informs us of infinite divine Principle and the rule with which to offset every suggestion of the power or influence of anything unlike God.

Armed with this understanding of the allness of God, did not the ancient worthies stand for Him upon the earth, and so doing, accomplish many mighty wonders? So wrestled Jacob at the brook Jabbok, until towards "the breaking of the day" his Peniel was won and a great victory over his own false material beliefs attained. Jacob was then ready to receive the spiritual name of Israel, which we read was given to him by the angel or messenger of God,—surely a divine intuition of the truth of Being, which came to this prince of Israel's house, a great forerunner of the household of faith. 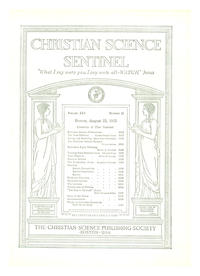