The economic systems of the world, like everything else which is a product of the human mind, are founded in inharmony. When the significance of this is fully grasped, the attempt to accomplish the impossible will be given up. Men will turn from effect to cause. They will begin to analyze that saying, so deep because so apparently simple, of Jesus of Nazareth: "For every tree is known by his own fruit. For of thorns men do not gather figs, nor of a bramble bush gather they grapes;" or, to reduce it to the terminology of the twentieth century, an economic system conceived in accordance with Principle cannot produce economic effects antagonistic to Principle. Therefore, any inharmonious economic effect must be produced by a cause antagonistic to Principle, since Principle, in its own nature, is harmonious. Speaking of men and women, on page 51 of "Unity of Good," Mrs. Eddy declares, with that marvelous insight which pierces straight to the spiritual fact, "They have none of them lost their harmonious state, in the economy of God's wisdom and government."

The word economy, of course, is not a mere synonym for frugality. It has come to mean frugality, amongst other things, it is true; but it is derived from two Greek words meaning house and steward, and in its true sense means "the administration of the concerns and resources of a community." Now, as every material phenomenon is the counterfeit of some spiritual reality, there is a divine economy of which all material economy is the counterfeit. It is this divine economy to which Mrs. Eddy refers in the passage just quoted; and it is in the exact proportion in which the individual masters this great metaphysical fact, that he realizes that precisely as he subjugates and destroys the material in his own consciousness he will succeed in demonstrating the at-one-ment of the spiritual reality with its Principle, God, and so begin to comprehend the meaning of that sentence on page 327 of Science and Health, "To the physical senses, the strict demands of Christian Science seem peremptory; but mortals are hastening to learn that Life is God, good, and that evil has in reality neither place nor power in the human or the divine economy." 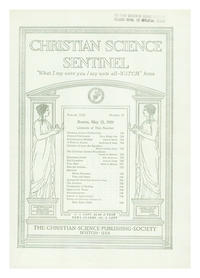