In 1904 Mrs. Eddy caused to be published in the Sentinel of March 12 the by-law entitled "Privilege of Members," which provides, "Members in good standing with The Mother Church, who are members of the faculty, instructors, or students in any university or college, can form and conduct a Christian Science organization at such university or college, provided its rules so permit" (Manual, Art. XXIII, Sect. 8). Since, then, societies or organizations have been formed in eleven universities and four colleges; and the regular meetings of these societies are announced in the Journal under the heading "Christian Science churches, except that they are held on some week day other than Wednesday, and as a rule are open only to members or graduates of the university or college and their invited guests. Testimonies are common which relate how Christian Science has enabled an individual to overcome fear and a sense of limitation, and thereby to achieve results in the classroom or in examinations which could not otherwise have been achieved. Frequently, too, the speaker expresses his gratitude for the help he has received at the meetings of the society.

One student related that when taking an examination in mathematics he solved every problem without difficulty except one, and spent an hour and a half on that one without discovering any solution which he had heard at a meeting of the Christian Science society in that university, testimonies in which the speakers had told how reliance upon the one divine Mind had enabled them to accomplish results which were impossible by the ordinary processes of the human mind. He laid aside the examination paper and spent some minutes in contemplating the great truth that God is the one infinite Mind, and that each man reflects that Mind, and for that reason has the natural ability to express the intelligence necessary for the solution of any problem. Then he turned again to the question which had baffled him, and saw a way of solving it. After the examination books had been read by the professor, this student was told that he was the only one in the class who had solved that particular problem; and he knew what had enabled him to accomplish that result. And far more valuable to him than the mere solving of every problem on an examination paper was the proof that the divine Mind is ever present, and that its infinite intelligence is always available to every one for the solution of all human problems. 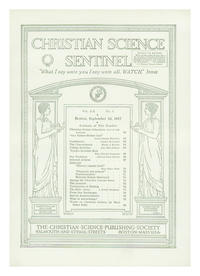