When my son was about five years old we were living in one of the suburbs of New York City, and he spent most of his time out in the fields about the house, running around in barefoot sandals. Many times in those five years he had run through patches of so-called poison ivy with no fear, and consequently with no bad results. One day, however, while I was busy about the house, he came to me very much disturbed because a little friend with whom he had gone off to gather wild cherries had told him that he must go right home, as he had walked through some poison ivy and would be poisoned. I reminded him of the many times he had done that same thing, and that he had never suffered from it, and told him to run on and play and forget all his fears.

It was not long before he was back again, in tears, telling me that his friend had said, "You must be poisoned, because you walked right in the poison ivy; and you simply have to be." By this time the child was manifesting all the signs of a severe case of poisoning, and it seemed right to deny, then and there, this law which mortal thought was holding over him so strongly, and the fear which it had developed. I therefore stopped my work, and we sat down together to reason about it from the standpoint of Christian Science. 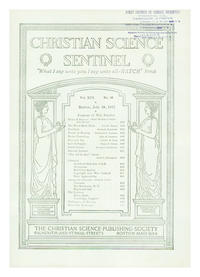