An alert distribution committee in a Christian Science branch church, appreciating the fact that an increasing human activity and a larger output of literature was not entirely an evidence of progress, decided to hold a meeting for the purpose of awakening thought to better metaphysical work along the line of literature distribution. The officers of the church were invited to participate, and to one of them, whose ability as a speaker was only mediocre, the opportunity took on the aspect of an impending calamity. To him the query, What can you do to take part in the meeting? loomed up as decidedly unanswerable; but the argument finally obtained that the members of the committee, as they were directly in touch with the problems and were actually doing the work, would naturally be expected to conduct the meeting and bring the metaphysical message to those outside the ranks of active workers, and who need only be alert and receptive to the good to be unfolded.

In this instance the mental work which would necessarily have to be done for the meeting appeared in a new-old light, and it was seen that through this work one would be participating as really and potentially as the most scientific or fluent speaker who might address the committee. It was obvious that as the metaphysical sense should precede all action, it was the most important consideration either in or out of the meeting, and further, that when the human activity unfolded, the only hope of performing it correctly and achieving the proper result depended entirely upon the preliminary mental effort. 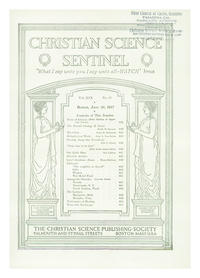