In a recent issue I notice the kindly inquiry from "Mortal Man"...

In a recent issue I notice the kindly inquiry from "Mortal Man" in reference to the teachings of Christian Science with regard to matter. He seems to feel that Christian Scientists, because they deny the reality of matter, also deny the existence of birds, flowers, trees, etc., and asks if they do not believe in the first chapter of Genesis.

Your correspondent will undoubtedly be pleased to know that Christian Scientists believe absolutely in the first chapter of Genesis, and understand it so clearly that they find it to be one of the most powerful arguments in favor of Mrs. Eddy's teaching that being is "very good" and is spiritual. They are convinced that the first chapter of Genesis and the first five verses of the second chapter are the revelator's record of his perception, through spiritual sense, of the true facts of being, of being in its true and perfect state, facts which had always coexisted with God when the "Lord God had not caused it to rain upon the earth, and there was not a man to till the ground."

Send a comment to the editors
NEXT IN THIS ISSUE
Article
It seems strange that a minister of the gospel should malign... 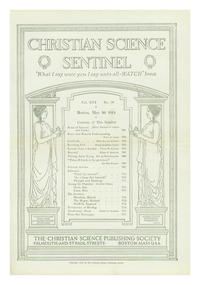