A LESSON FROM STARLIGHT

When Truth first challenges the resisting ardor of the human will, there sometimes comes this hard question to prove the student: If God is of purer eyes than to look upon inquiry, why did He send a predestined and proclaimed Redeemer to save the human race from its obvious evil? When we cast a backward glance upon the defeated major confusions and contradictions with which we have had many a wrestle, we can but remember that none was greater than our ignorance of God, and our sense of remoteness from Him.

The Bible offers many conspicuous examples of the living faith and inspiration possible to those who claimed communion with the divine presence. In Genesis we read, "Enoch walked with God." Abraham, in his ninety-ninth year, listened to the covenant from the almighty God, who presently "left off talking with him." Job, erstwhile willing to believe by the hearing of his ear, declared, "But now mine eye seeth thee." The Master, whose every word must find vindication in the ultimate demonstration of Christian Science, said, "He that hath seen me hath seen the Father." Following these testimonies and declarations comes the word of St. John the beloved, sage and divine, who twice declares, "No man hath seen God at any time." 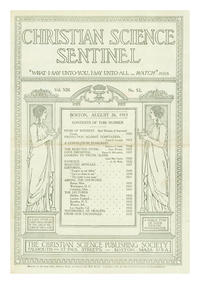