THE CIRCLE OF LIFE

The gospels show that Jesus began to prove life to be unending by knowing that life does not begin, and without this knowledge his demonstrations would have been impossible. No teaching of our Master is more emphatic than that concerning his sonship to God, and the fact that this relation had always existed.

The first recorded utterance of Jesus shows that even as a boy of twelve he had pondered these things and knew that he must resist the thought of human parentage and birth which would give to his life a beginning. At this time he separated himself from his parents and tarried behind in the temple. When sought and reprimanded, he gave this answer not only as a reason for his act but as a key to his future thought and conduct, "Wist ye not that I must be about my Father's business?" This answer might be regarded as evidencing only that he had been educated with a knowledge of the immaculate conception and did not recognize the fatherhood of Joseph. This view is disproved, however, since the same thought is expressed in our next account of him at the marriage feast of Cana, when Mary in the ardor of motherhood urged him to do a wondrous work. He turned to her with the question, "Woman, what have I to do with thee?" In this he was not guilty of any disrespect, but evidently resisted the thought of all mortal parentage, asserting, recognizing, claiming God alone as his Father-Mother. 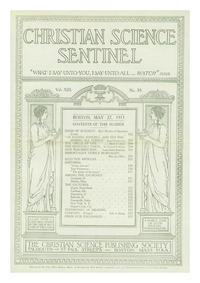