In answer to the letter of "Antæus," I should like to point...

In answer to the letter of "Antæus," I should like to point out that as long as a child believes in ogres he suffers from this fear. He may lie awake at nights, have bad dreams, and be seriously affected in health by a thing which has no reality. When the time comes that the boy has risen to that point of mental development where he no longer believes in ogres, his fear of them is entirely cured, and the ills attendant on this fear disappear. In the same way, as long as a man believes that each person has a mind of his own, he cannot help believing to some extent in the power of suggestion, and this belief, Christian Science teaches, acts injuriously on the system. As mesmeric treatment is not based upon the truth of being, but upon illusion, it would seem that all high-minded people would hesitate to place themselves under its influence, no matter who the operator might be. Christian Scientists are, however, convinced of the powerlessness of one human mind, so called, to control another.

The health which Christian Scientists enjoy is founded on the recognition of the nature of God as the source of life, omnipotent good, ever-present Love. The steps by which this position is gained are the steps pointed out by the Master,—purity, meekness, self-renunciation. As we cease believing in a will of our own, we cease believing in the wills of other people, and to that extent become conscious of the government of the divine Mind.

Send a comment to the editors
NEXT IN THIS ISSUE
Article
It sometimes happens that those who make a more or... 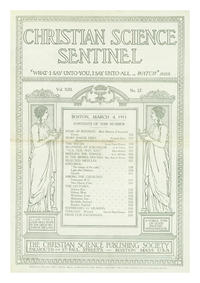