THE PURPOSE OF DEMOCRACY

The thoughtful observer of the times will ask as the question of today, What is the form of church government most consistent with the teaching and practice of Christian Science, and why is it so? An answer to the first question is given by the by-law of The Mother Church which states that "each branch church shall be distinctly democratic in its government" (Article XXIII, Section 10); but it contains no statement of why such should be the form. Respecting our place in the world, our Leader says, "The Christian Scientist has enlisted to lessen evil, disease, and death" (Science and Health, p. 450). Just so far as we elevate and purify every material situation with which we have to deal, to that degree will we hasten the day when the material structure, whatever it may be, will give place to the spiritual fact. It behooves us, therefore, as thoughtful Christian Scientists, to consider what is the contribution to the world of our church organization?

It is necessary here that we keep clearly in mind the meaning of the word democracy. It is derived from the Greek demos, people, and kratein, to rule, or be strong; hence it is a "government by the people; a system of government in which the sovereign power of the state is vested in the people as a whole, and is exercised directly by them or their elected agents" (Century dictionary). A republic, on the other hand, is "a government in which the executive power is vested in a person or persons chosen directly or indirectly by the body of citizens entitled to vote" (Century dictionary); a government, therefore, in which the people do not directly exercise their strength.

Send a comment to the editors
NEXT IN THIS ISSUE
Article
An article in your paper on "Freak Religions," in which... 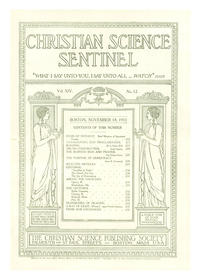