"LET YOUR LIGHT SO SHINE"

A peculiar grievance held against Christian Science by some of its critics is that it "draws from the membership of other churches," a fair inference from such criticism being that both the person who with the courage of his convictions changes his religion, and the church which receives him, have thereby done something wrong. Whether this criticism was intended to mean that a person who has once identified himself with some particular denomination should forever afterward remain a member of it, even if he failed to find therein the spiritual uplift and peace which he does find elsewhere, has never been made clear, but this would seem to be the logical deduction from such a premise.

Fortunately this is not the view held by all those who speak with authority, for at least one of the principle Protestant churches has been put on record by one of its clergymen, who has recently made public statistics compiled from official resources. The figures show that in this country, during the year 1908, one hundred and twenty-five clergymen from other denominations united with the church of which the compiler is a member, the accessions from one denomination alone being thirty-five, from another twenty-eight, and so on down to one each from several of the smaller religious bodies. If it is right for these clergymen to be received into the church in question because of their change of religious belief, it certainly would be riht for them to be received into any other church for the same reason, and in this regard the right of the laity cannot well be separated from that of their spiritual guides. 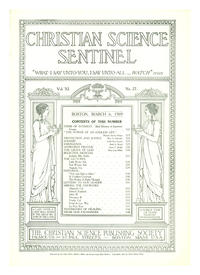