The only evil we have to combat is the carnality of human sense, which is constantly whispering untrue, unkind, unholy thoughts,—thoughts of envy, jealousy, hatred, revenge, covetousness, and such like. Says Mrs. Eddy, "If mortal mind knew how to be better, it would be better" (Science and Health, p. 186); and this carnal mind has always been the bane of humanity. Even Jesus felt the working of the human mind when, at the beginning of his ministry, after being in the wilderness for forty days, he was three times tempted of the evil one; but even though "an hungered," he was able to overcome them all. When, at the pinnacle of the temple, the devil, in derision of his claim that he was the Son of God, tempted him to throw himself down from thence, assuring him it was written that God would give his angels charge concerning him, Jesus answered: "It is written again, Thou shalt not tempt the Lord thy God." Once more he was tried with a mortal, material thought,—a thought of how much worldly honor and prestige he would gain, what great power he would have over all the kingdoms of the world, what a following would be his, if he would renounce God and serve evil; but Jesus said, "Get thee behind me, Satan." Then, we are told, evil departed from him for a season, and "angels came and ministered unto him."

Mortal mind was then as now ready to whisper thoughts of distrust and discord. In the garden of Gethsemane, Jesus prayed that if it were possible the cup might pass from him; but even then he said, "Nevertheless not as I will, but as thou wilt." Temptations pursued Jesus up to the time of his crucifixion on Calvary. We hear him saying, "My God, my God, why hast thou forsaken me?" The physical or mortal element was fighting against the spiritual; but Spirit overcame, as it always does if we "cling steadfastly to God and His idea" (Science and Health, p. 495). What Jesus overcame he knew others could overcome, for he said, "Be ye therefore perfect, even as your Father which is in heaven is perfect." Nor was he unmindful, when he gave this command, of "the sin which doth so easily beset us." The apostle Paul says, "For we have not an high priest which cannot be touched with the feeling of our infirmities; but was in all points tempted like as we are, yet without sin." If then Jesus, our elder brother, was beset with the same temptations of mortal mind that we are, he understood the many false beliefs we have to overcome; and being the Wayshower, he left his example for us to teach us how to do this. He vanquished evil and proved the power of God, good. Every evil belief that came to him was met and overcome—its nothingness proved—according to divine Science. Through our inspired Leader the way which had been lost through the pride of this world and the lust of the flesh, has once more been opened to suffering and sin-sick humanity. 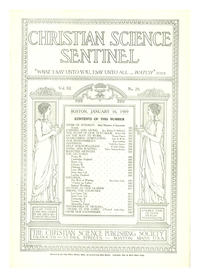