with contributions from W. H. Judkins

Under the auspices of the three London churches Edward A. Kimball of Chicago delivered a lecture for Third Church of Christ, Scientist, London, at Queen's Hall on April 13. The hall has a seating capacity of about three thousand and the lecture was announced for eight o'clock. The doors were opened at a quarter past seven, and in fifteen minutes nearly every seat was occupied. Half an hour later the nine entrances had to be closed, and crowd of many hundreds turned away in spite of their punctual arrival, as not a seat was to be had in any part of the vast hall. Such and attendance in this, the most popular concert hall in London, is without precedent except on the occasion of this Christian Science lecture. A more attentive audience never was seen, and with a very few exceptions all present remained until the close, any seats becoming vacant being instantly filled from the waiting crowd outside. The Morning Post, a leading daily, published an excellent account.— 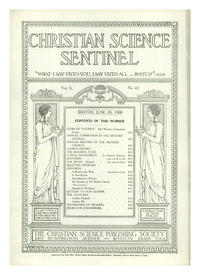