In a recent issue appears a report of the convention...

In a recent issue appears a report of the convention of Christian churches, in which a clergyman is quoted as saying, "There is not one good thing in Christian Science that does not come from Christ. We do not need more Science, but more of Christ." As this statement carries the inference that Christian Science is something part from Christianity, I wish to explain that Christian Science is not a new religion. for it is based exclusively upon the teachings of Jesus and does not depart from them either in Principle or practice. Christian Science insists that the gospel as taught by Jesus is as efficacious to-day as it was in the first century, and is proving it by healing the sick and reforming the signs in fulfilment of the Master's promise, "And these signs shall follow them that believe." Therefore Christian Science is a fuller Christianity than the world has heretofore known, and is giving us what the good doctor says we need, "more" of Christ." Christian Science has nothing in common with hypnotism, suggestion, or any so-called systems of the human kind. It is a religion the religion of the Bible, and its Master is Christ. 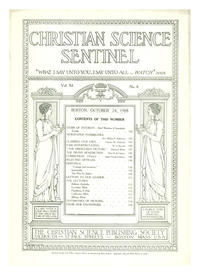