The Mission of the Churches

MR. ARTHUR HENDERSON, M. P., of England, Chairman of the Representation Committee, has recently said: "The exclusive concern of the churches should not be with a future state of existence. Rather should they be concerned with this world. Their mission should be to bring to pass here a kingdom of righteousness and peace, and to carry redemption into our social relationships;" and in this, it seems to us, he expresses in a large degree the need of the hour. Jesus prayed, and taught his disciples to pray, "Thy kingdom come. Thy will be done in earth, as it is in heaven;" and he was much concerned with the eradication of both sin and sickness from the lives of those who came under the immediate influence of his ministry.

The churches, to be effective in their labors for the masses, must not neglect the example of our great Master in the healing of sickness and the establishment of righteousness on earth. They must be about their Father's business, just as Jesus was about his Father's business; and it is recorded of his earthly career that "he went about all Galilee, teaching in their synagogues, and preaching the gospel of the kingdom, and healing all manner of sickness and all manner of disease among the people." They must awake from the belief that this healing ministry is a closed chapter in the history of Christianity. Mrs. Eddy, the Discoverer and Founder of Christian Science, has demonstrated that the healing of the sick as our Master healed them is not only a present possibility, but an accomplished fact, and this is amply proved by the testimony of thousands who have been healed. A typical testimony to this fact is that of Leonora Heale of North Yakima, Wash., which appeared in The Christian Science Journal for May. She writes as follows:— 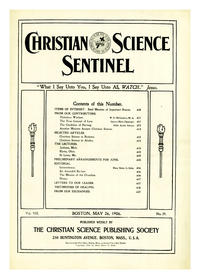