IN the Lamentations of Jeremiah God's mercies are recalled, and it is written of them, "They are new every morning." Tender and clear, like the early shining of the morning dew, the lovingkindness of the Lord springs anew with each awakening, in that heart which turns to Him for all that the day may bring forth. A new day has such wondrous possibilities; it holds such untried opportunities for knowing and being and doing all that is good; it unfolds so many unstained hours in which to correct yesterday's mistakes and to profit by yesterday's lessons, that psalmist and prophet and poet have found in it a beautiful type of the renewal of all that is beautiful and true. As the new morning follows each night, so renewed consecration and endeavor may follow every season of sorrow, oppression, or failure, and no experience is so severe but that its night passes and its morning breaks, whensoever thought turns without reservation to God for deliverance and elightenment.

Christian Science teaches that God is not changeable, sending His mercies because besought therefor, or withholding them at will from those who fail to please Him, but rather that God is loving and good to all, sending His rain, the Master tells us, "on the just and on the unjust," and making "his sun to rise on the evil and on the good." Though His manifestation is veiled to material sense, God's mercies, God's tenderness, yea, the actual presence and power of God, is everywhere present, showering blessings in abundance upon all. Whence, then, the night of sorrow, the season of sin, the continual besetments of discord which seem to entangle the footsteps and sadden the heart of mortal man? The ages have sought in vain for an explanation of the evil, and to that sense which sees and believes evil, evil clamors that it must have had a beginning, and that any philosophy which accords it not origin and presence is faulty. Conversely, to that consciousness which sees not and knows not evil, no sense of its original inception or present existence can be suggested.

Send a comment to the editors
NEXT IN THIS ISSUE
Article
Man, the Image of God 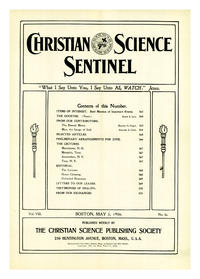