I have taken great pains to investigate and talk with persons...

I have taken great pains to investigate and talk with persons who have been the objects of some wonderful cures, and to talk with the person who has treated them, so that I might be able to say, in some sense, that I had a personal knowledge of the cases.

It has been a longing of mine to be able to go through, as nearly as I could, the whole catalogue of human ills as they are presented to human sense, and I have almost accomplished it; so that well-nigh every phase of sorrow, suffering, and heart-break, I have seen cured. For a long while I knew I could say that the lame walk, I had seen so many instances of that kind; but I wanted to be able to say that the blind see. I knew where very defective eyes were cured, but I wanted to find an instance where blindness had been total or for a long term of years, so that no one could say that it was not a real, genuine instance of blindness. I wanted to see it perfectly healed. I had the pleasure within the last six weeks of seeing just such a case. I met a young woman twenty-two years of age at a dinner party of Christian Scientists in a little town in Nebraska, and as I looked across the table at her, I could not help saying, "Your life has been a long holiday. You know no sorrow or tears;" but within fifteen minutes I learned that if I had taken the combined sorrows of all the people at that table they would not have equaled a tithe of what she had suffered.

Send a comment to the editors
NEXT IN THIS ISSUE
Article
Christian Science introduces the teaching of the All-in-all... 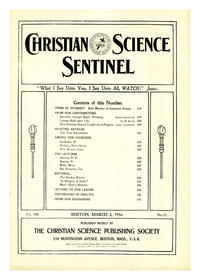