[Following is substantially the text of the program of the above title released for broadcast the week end of January 8-10 in the radio series, "How Christian Science Heals," heard internationally over approximately 800 stations. This is one of the weekly programs produced by the Christian Science Committee on Publication, 107 Falmouth Street, Boston 15, Massachusetts.]

RADIO PROGRAM No. 330 - Understanding What Life Really Is

Speaker: Is life at the mercy of material conditions? Sometimes it seems so. Things seemed at a very low ebb for our guest. But just as a beam of light will dispel a large area of darkness, so the understanding of God destroyed her hopelessness, brought complete health to her body, and gave her a worthwhile purpose for living. I'd like Miss Elida Cuddeback, of Arcadia, California, to tell you about this experience herself.

Miss Cuddeback: When I was nine years old, I became ill with tuberculosis, and over a period of years it progressed to its very last stages. I was sent away to a sanatorium a number of times. After I returned home the last time, a surgical operation was performed to relieve me of organic troubles which had caused me much pain. But there was no relief, and also there was a bad heart condition. 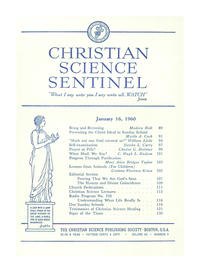