I am very grateful for the ways...

I am very grateful for the ways in which God's love has been shown to me since I took up the study of Christian Science in earnest. In my childhood I attended the Christian Science Sunday School, but later I drifted away from its teachings for several years. I did not appreciate what I had received until I tried to get along without it. Since becoming a sincere student of this Science, I have experienced many proofs of the sustaining and protective power of divine Love.

One day I fell backward from the top of a stepladder. Even before I landed, I found myself declaring the truths contained in "the scientific statement of being," given to us on page 468 of Science and Health by our beloved Leader, Mrs. Eddy. I fell on a flight of steps, with one foot badly twisted under me. The pain was intense, and for a few minutes I was quite severely shaken up.

Send a comment to the editors
NEXT IN THIS ISSUE
Testimony of Healing
In Colossians we read (3:2),... 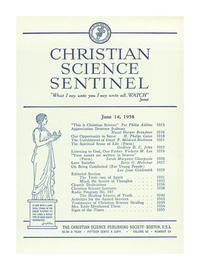