[Following is the text of the program of the above title released for broadcast the week end of October 17-19 in the radio series, "How Christian Science Heals," heard internationally over approximately 800 stations. This is one of the weekly programs produced by the Christian Science Committee on Publication, 107 Falmouth Street, Boston 15, Massachusetts.]

RADIO PROGRAM No. 266 - Putting Off Burdens of the Past

with contributions from Florence Adams McGill

Speaker: How tempting it is sometimes to hold on to the past and to believe that something that happened years ago can limit us or cause us unhappiness today! But we do not have to stay in bondage, as our guest found. By gaining a deeper understanding of God and man, she was freed from fear and unhappiness and from an unsightly growth. She's going to tell you about it now. Here's Mrs. Florence Adams McGill, of Evanston, Illinois.

Mrs. McGill: About twenty years ago, when I was a rather unhappy schoolgirl, a growth appeared on my leg near the ankle. We were not Christian Scientists, and my parents had a doctor look at the growth. He told us it should be watched, because it would not go away of itself and might become troublesome. It grew very slowly, and I guess I just became accustomed to it as I'd become accustomed to the discord in my home. 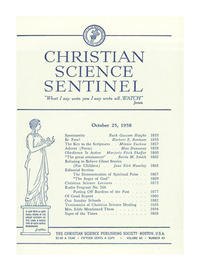