When I attended my first...

When I attended my first Thanksgiving Day service in a Church of Christ, Scientist, I was impressed by the fact that the testimonies were delivered with much feeling. After several testimonies a man arose and said, "I am grateful for an awakened consciousness." This impressed me even more.

Later, after studying "Science and Health with Key to the Scriptures" by Mary Baker Eddy, I learned that each one has that of which he is conscious. However, due to the deceitful nature of the five physical senses, one can be conscious of lack in the midst of plenty and of discord in the midst of harmony. Hence the necessity for the awakening, the correction of sense testimony by the spiritual facts of being, which Christian Science presents as the true consciousness. 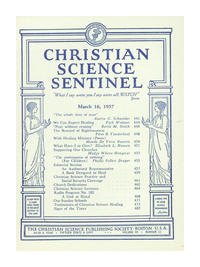