"THERE IS LIFTING UP"

Deep in the excavation of a limestone quarry a beautiful butterfly flitted from stone to stone, apparently in search of food. The cold wet stones offered him nothing. The tourist who observed him hoped that he would spread his wings and fly upward into the world of flowers and sunshine— his natural habitat.

The one watching the butterfly thought of her own life before she took up the study of Christian Science. She had been considered frail and delicate as the result of a heart injury when a little child. Then one day she was taken to a Christian Science practitioner. After a few Christian Science treatments, she gained the assurance that God was her Life, and a beautiful healing came. She accepted the following statement that Mary Baker Eddy makes in "The People's Idea of God." After commenting that faith in drugs makes one lose faith in omnipotence, our Leader says (p. 12), "As if Deity would not if He could, or could not if He would, give health to man; when our Father bestows heaven not more willingly than health; for without health there could be no heaven." 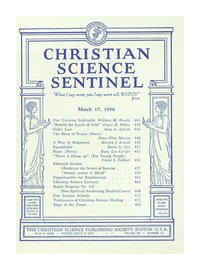