Defining Love is the work of eternity. Jesus pointed the way in a life that was a ministry of evidenced Love—Love that healed all manner of discord, Love that fed the hungry, comforted the sorrowing, raised the dead. Mary Baker Eddy, speaking of the essence of Jesus' life, writes in "Science and Health with Key to the Scriptures" (p. 54), "Out of the amplitude of his pure affection, he defined Love."

This divine impetus led the Way-shower occasionally to the mountaintop, but more often to the valleys, where he found ample daily opportunity to minister to the needs of those about him. He retired from the people and sought solitude only for periods of spiritual refreshment, always returning to continue his blessed ministry. Though the multitudes thronged and pressed him, he drew not back but healed them. He was the visible expression of the Love that by its very nature fills the need. 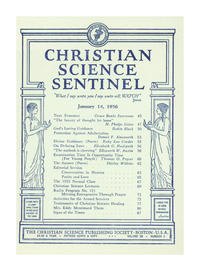