THE WAY OF ESCAPE

We live in a period of great expansion. On all sides the limitations of mortal mind are crumbling away as the spiritual concept of man and the universe is revealed. This concept includes unlimited progress and expanding liberties based on the knowledge of spiritual verities.

The advance in material progress now taking place has been quickened by the intensive research and study by physicists and others trained to think and experiment. The horizon of human achievement has been broadened by their work, but the physical scientist has not produced a solution for fear, hatred, cruelty, or unrest. Indeed, these errors of the carnal mind, so called, seem to have increased rather than diminished. The release of stupendous forces supposed to reside in the atom has added to, rather than abated, fear and uncertainty in the world. 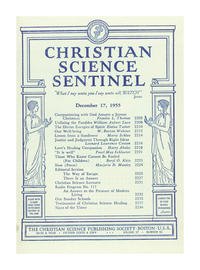