HOW THE BIBLE IS VIEWED IN CHRISTIAN SCIENCE

From the dawn of recorded history there have been men who understood God sufficiently to look to Him for comfort and guidance. Patriarch and prophet were aware of the majesty and the nearness of God. To Abraham, He appeared as the Almighty; and to Moses, as the one I AM, the only God.

The Bible, with its account of the early search for Truth, has been a beacon for the spiritually-minded men and women of succeeding generations who have sought to live in obedience to its teachings and have found strength in its promises. To some, however, its meaning has seemed obscure, and they have thought that its message was for some era that is past rather than for all men and all time. 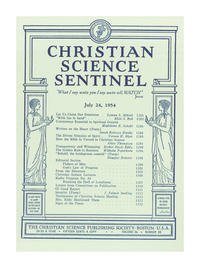