When faith has found a foothold in consciousness, it is not long before inspiration and understanding follow. Lack of faith and incredulity in regard to spiritual cause and effect are among the tragedies of the modern world. These seem to be due to the development of material knowledge, which places cause and effect where they do not belong, namely in matter. Lack of faith, or infidelity, is a phase of animal magnetism. It is always the accompaniment of material mindedness. The more material the outlook, the less faith there is in spiritual causation.

The Apostle Paul was confronted with incredulity and skepticism when brought before Festus and King Agrippa. Paul had previously declared his conviction as to the resurrection from the dead, and to this end he preached to the Jews concerning Christ Jesus. It was upon the doctrine of the resurrection that conversation obviously turned when the apostle spoke with Agrippa, for Paul exclaimed (Acts 26:8), "Why should it be thought a thing incredible with you, that God should raise the dead?" As Paul continued to speak, Festus was moved to declare in a loud voice (verse 24), "Paul, thou art beside thyself; much learning doth make thee mad." The apostle, however, stood his ground: "I am not mad, most noble Festus; but speak forth the words of truth and soberness." 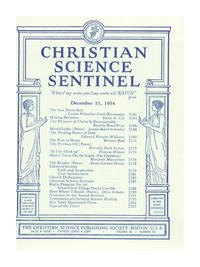