A PRACTICAL SENSE OF CREATION

Creation is usually considered by the human thought to be the coming into existence or the beginning of something. This concept of creation as a product beginning at a point of time, under untried conditions, fashioned of unproved materials, would lay creation open to chance and many variables. And a creation coming into being under such circumstances might succeed or fail, be worthy or unworthy, be an innovation or a poor imitation.

Mary Baker Eddy has this to say about creation in the Christian Science textbook, "Science and Health with Key to the Scriptures" (p. 507): "Creation is ever appearing, and must ever continue to appear from the nature of its inexhaustible source." The Bible tells us in Genesis that the inexhaustible source of all is God, who made the heavens and the earth and all that they contain. "And God saw every thing that he had made, and, behold, it was very good" (Gen. 1:31). The Bible teaches that man is made in His image and likeness and has been given dominion over all the earth. 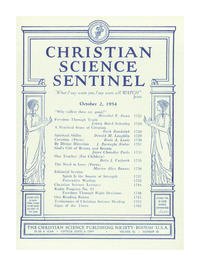