It is with deep regret and with sincere sympathy for the many friends and pupils of our beloved associate and co-worker, George Wendell Adams, C. S. B., that we report his passing on at his home in Squantum, Massachusetts, on Thursday, October 22. Mr. Adams served the Cause of Christian Science actively for more than sixty years, and for almost twenty-nine years of that time as a member of The Christian Science Board of Directors, his service in that post being the longest in the history of the Christian Science movement.

Mr. Adams was a native of Kingston, Massachusetts. He received his academic education at Phillips Exeter Academy, Chauncy Hall School, and the Massachusetts Institute of Technology. 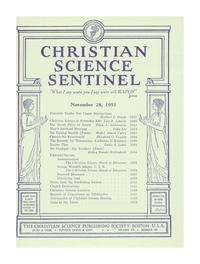