I had had several operations for...

I had had several operations for tumors and had been told by specialists that I would frequently be in the hospital. For years I had been seeking to know more of God but did not feel satisfied with the results of my search. One evening I prayed to know how God wanted me to live and asked Him to show me my mistakes.

Some days later, while out walking, I asked a woman if she would allow me to sit down on her porch, as I did not feel well. On leaving, I mentioned that I had been out of the hospital for only a short time and had been told to go back when I could bear the pain no longer. I added there was only one who could cure me and that was God. The woman said if I really meant what I said, I should attend the Wednesday testimony meeting that evening in a branch Church of Christ, Scientist; and she offered to take me in her car. During the meeting I knew that I had found what I had been searching for.

Send a comment to the editors
NEXT IN THIS ISSUE
Testimony of Healing
It is difficult for me to express in... 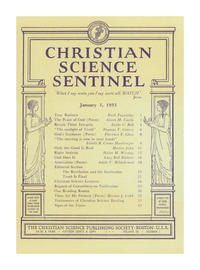