A few years after I had taken a...

A few years after I had taken a position as a primary school teacher, I discovered that my eyes were not functioning normally. This was at the end of the summer session, and I hoped they would improve during my vacation. But on the contrary they grew worse. I could neither read, write, knit, nor sew—activities indispensable to the carrying on of my profession.

My husband was not at home at the time, and I was alone with our three little children. Whenever I was out of doors in the sunlight my eyes pained me very much. One day my mother came to visit me, and observing how helpless I was she insisted that I see an oculist; I went to one in a neighboring town. There were a number of patients in the waiting room, and from their conversation I got a bitter idea of what I was facing. When my turn came and the doctor examined my eyes, he began to grumble and said: "Why have you waited so long? You will have to go to the hospital at once and for at least three weeks be given injections. If you do not, you will lose your eyesight altogether." He prescribed an ointment for my eyes, which, however, I could not use because the pain it caused was too severe. 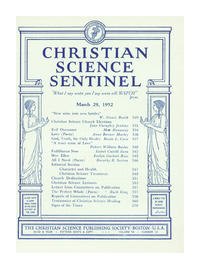