Love of The Mother Church Shown in Flood Relief

Several days, of continuous heavy rainfall in the northeastern section of the state precipitated the highest flood ever recorded in the area, driving thousands from their homes and causing much loss and devastation. As in previous times of disaster, The Mother Church came to the rescue of Christian Scientists. At the height of the flood I received a telephone call from Mr. George Charming, Manager of Committees on Publication, informing me that The Christian Science Board of Directors desired that I take charge of relief operations and make certain that the emergency needs of our church members were promptly cared for.

The board of each branch church in affected areas appointed local flood relief committees to supply shelter, food, and clothing to those who had been driven from their homes. Depots were opened where food and clothing were assembled and supplied to those in need.

Send a comment to the editors
NEXT IN THIS ISSUE
Testimony of Healing
I am indeed very grateful to God... 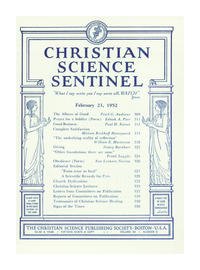