"THE KING OF THE MENTAL REALM"

"I Saw in the right hand of him that sat on the throne a book written within and on the backside, sealed with seven seals," writes John (Rev. 5:1). And he records that he "wept much" because no one was found worthy in heaven or on earth or under the earth to open the book and to loose the seven seals; that is, to make plain to human understanding the deep spiritual significance of the truths contained in the Bible, truths which unveil the real purpose of life: the conquest of evil and the demonstration of immortality. John feared greatly lest the message be lost which should penetrate the mystery of Godlikeness, break the Adamic dream, and make plain man's spiritual origin and status, his oneness, or unity, with the Father and his divinely bestowed dominion. Within the sealed book was the secret of his great Master's triumph, the key to resurrection and ascension. At this moment there appeared to John "the Lion of the tribe of Juda," he who was worthy to open the book and to loose the seals thereof.

Mary Baker Eddy, under the marginal heading "Qualities of thought," gives on page 514 of the Christian Science textbook, "Science and Health with Key to the Scriptures," precisely those qualities of human thought which will open the way to the spiritual understanding of the profound truths contained in the Scriptures, the truths which enabled Jesus to prove to humanity the allness of God, good, and the nothingness of evil. Here are her words: "Moral courage is 'the lion of the tribe of Juda,' the king of the mental realm. Free and fearless it roams in the forest. Undisturbed it lies in the open field, or rests in 'green pastures, ... beside the still waters.'" 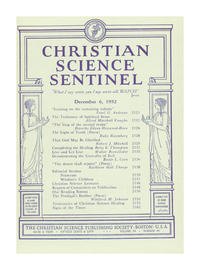