The compassionate appeal of Christian Science lies in the fact that it brings to the human consciousness the realization of the presence of but one creation, the spiritual, and of its completely perfect and harmonious nature, devoid of sin, sickness, or death. Christian Science also brings the realization that the so-called material creation, with all its woes, is not real, though seeming to be real to the unillumined thought. It is the purpose of this Science to disabuse human consciousness of illusory beliefs, based on the assumption that matter is real, beliefs that seem to manifest themselves as sin, sickness, and death. It is its purpose to bring to humanity the understanding that man reflects or expresses God now, reflects Him in all the beauty, harmony, and completeness of Soul. Human thought is thereby clarified and enlightened until error is progressively destroyed, leaving only the consciousness of reality—the consciousness of the one Mind, knowing only its own perfection and harmony.

While one is still laboring under the mesmeric influence of inharmonious beliefs, it is sometimes difficult for him to grasp the fact that man is perfect because God is perfect, until this fact has been demonstrated in his own experience. After his consciousness has been lifted out of the shadows of material belief into the light of Truth, and this Truth has appeared to him humanly in the healing of sickness or the disappearance of other inharmonious conditions, he may more readily grasp Christ, Truth, simply because the works have proved what the words have said. 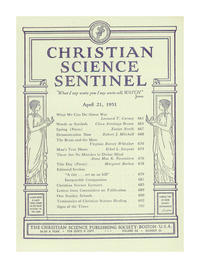