"God created man in his own image, in the image of God created he him; male and female created he them" (Gen. 1:27). This quotation from the Bible reveals the divine fact that God is our Father. This concept of God as Father was understood in a measure by spiritual seers through the centuries before Christ Jesus' era. That it was fully realized by him the Master demonstrated throughout his earthly experience, and he clearly emphasized this truth when he gave the disciples the Lord's Prayer, beginning (Matt, 6:9), "Our Father which art in heaven."

The fact of man's true parentage is further elucidated by Mary Baker Eddy in the spiritual interpretation of this passage from the Lord's Prayer as given in "Science and Health with Key to the Scriptures" (p. 16): "Our Father-Mother God, all-harmonious." She thus adds the revelation of God as Mother. As this truth becomes more generally accepted, mankind will benefit from the ever-increasing realization that both fatherhood and motherhood are included in omnipresent, omniscient, omnipotent divine Being. 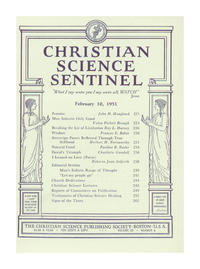