Some years ago an alarming epidemic broke out in a large city, and one day while walking down the street the writer was suddenly smitten with all the symptoms of the disease. The attack was so severe that for a moment he saw himself at the mercy of this disease, which had already claimed many victims. Instantly, however, the disease was seen to be an aggressive suggestion, and it was repudiated in accordance with the words of the Bible (Matt. 5:25), "Agree with thine adversary quickly, whiles thou art in the way with him."

The writer had learned in Christian Science that the reverse of error is true, and he turned, therefore, from the aggressive suggestion of general belief to the idea of individuality, an idea which had become familiar and dear to him during his many years of adherence to Christian Science. This wonderful thought then came to him: Individuality reflects the oneness of God, hence excludes dualism. He also recalled a statement once made by a Christian Science lecturer, namely, that the individuality of the real man is immune to every false claim of aggressive evil. As this thought came to him, the joy and accompanying peace were so great and powerful that he was conscious of victory over this temptation, and he experienced the spiritual uplift which always follows temptation overcome. The result was that by the time he had reached his destination the symptoms had disappeared and he was perfectly free. 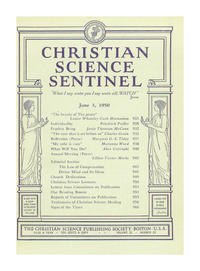