GOD IS OUR LIFE

On page 330 of "Science and Health with Key to the Scriptures" by Mary Baker Eddy is this statement: "God is infinite, the only Life, substance, Spirit, or Soul, the only intelligence of the universe, including man." This is a direct, absolute statement of truth.

The writer's introduction to Christian Science was her own healing of a so-called incurable disease. This healing was to her positive proof that God is truly our only Life. At the time of this healing she was the wife of a Protestant minister and the mother of three children. She had been brought up by Christian parents of beautiful character, and her concept of God was based on their teaching, which presented God as corporeal, the stern but loving judge and Father who meted out punishment as well as blessing. Her husband believed that sickness was sent of God for our purification. Because she was a mother, she never could quite accept this concept of an afflictive God, her heavenly Father. All she knew of Christian Science was contained in a series of three sermons delivered by her husband periodically to denounce what he believed to be a heretic religion. 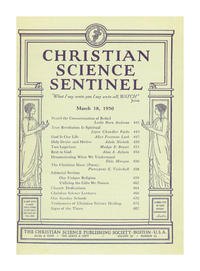