Christian Science has brought many blessings into my life. My first healing was of deep-seated bitterness. I had been the innocent victim of a malicious scandal, and as I was young, it seemed a very unjust experience and a terrible tragedy to me. While in this state of thinking, I was led to the home of a Christian Scientist. She told me something about her religion, and after a prayer for guidance I started the study of it.

I called on a practitioner and asked for treatment for another problem, but did not tell her of the afore-mentioned incident, as I did not realize I could be helped along that line too. She started working for me, and the next day I suddenly realized that I was healed of all the bitterness and hurt and was filled with complete forgiveness toward everyone who I believed had wronged me. During the years since, I have realized the value of that healing. 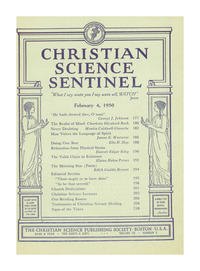