WE NEED NOT BE AFRAID

Many profitable lessons may be drawn from the interesting experience of Jesus' disciples recorded in the sixth chapter of Mark's Gospel. The disciples were alone in a boat on the Sea of Galilee. Because of the fierceness of the winds and turbulence of the waves the disciples were terrified. Only a short time before, they had been with their Master in the desert, where he had applied Love's law of abundant good to dispel the belief of lack for the many people who had followed him. A supply of food was immediately at hand, not only enough to feed five thousand, but sufficient to fill twelve baskets with the fragments which remained.

We might think it strange that having so recently seen the great power of God's law the disciples should again doubt or be afraid. But have not we too had proof after proof of God's omnipotence, omniscience, and omnipresence, and have not we sometimes doubted and been afraid? If we would conquer fear, we must reject it whenever it knocks at the door of our thought and hold steadfastly to the spiritual fact of the presence and power of divine Love, which is ever available, and whose law is ever operative to produce harmony. 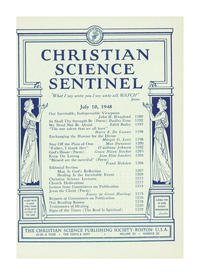